Leaving a Legacy: How to Run a Young Life Senior Meeting 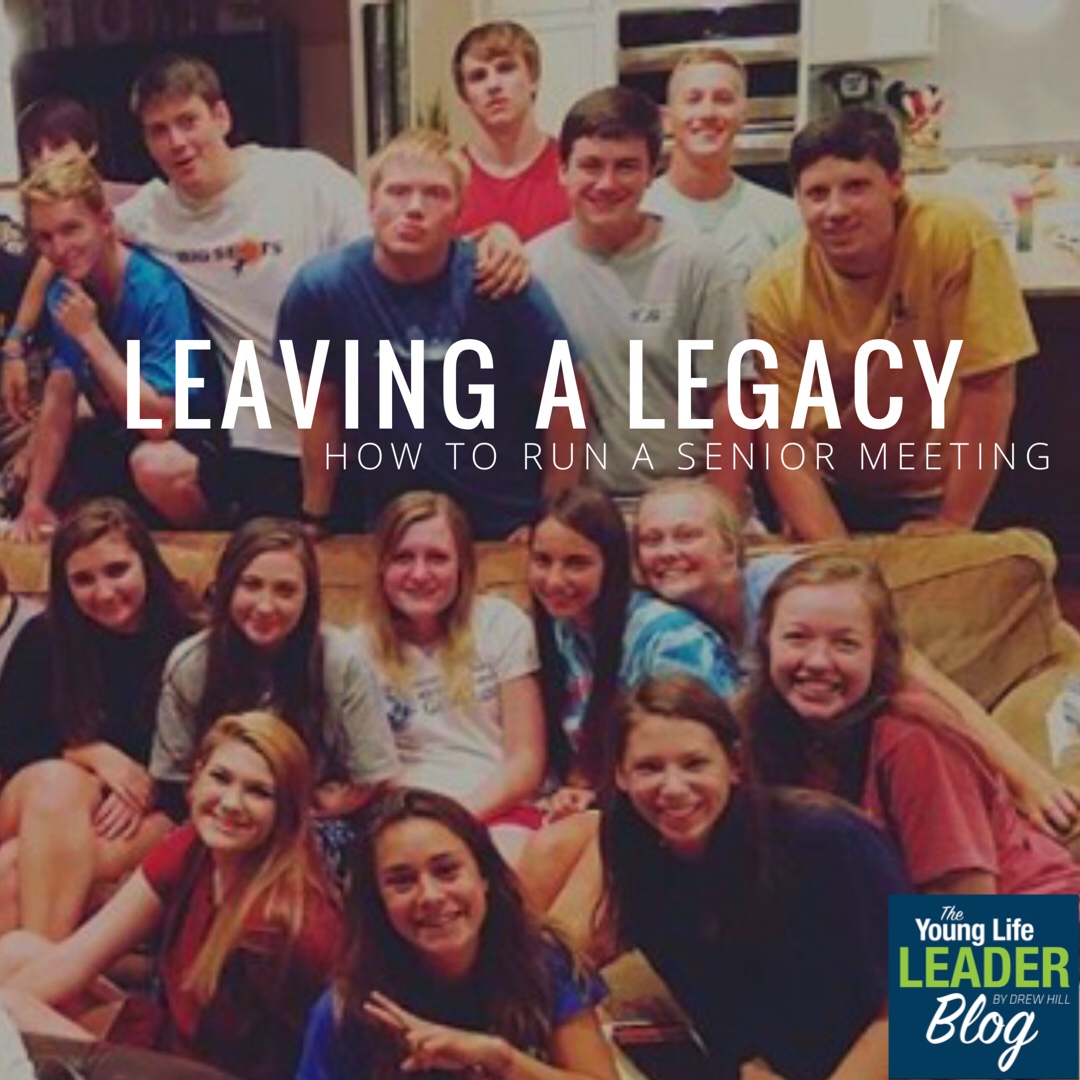 Over the past few years we’ve kicked off the new semester of Young Life with a ‘Seniors Only’ meeting. Special thanks to Brian Summerall for sharing his wisdom with us and prompting this new rhythm.

It has worked well for us to hold our ‘Senior Meeting’ on the evening of the first day of school. In addition to promoting the event on social media, our YL team has divided up the list of seniors and made personal invites to each of them.

We try to plan the Sr. Mtg with even greater intentionality than we would give to planning club. This is such an important part of the Young Life year in setting the pace and casting the vision. Below is a sample schedule we’ve used in the past.

7:30– Adult leaders arrive to pray and get music and food and AV set up. Have music playing in background.

8:15– Start with welcome, leaders introducing themselves and an opening prayer.

8:20– Ask the seniors to one by one go around and share ‘How did you first hear about Young Life? Why did you come? What was it like?’  As they are sharing have an assigned leader listen and write down every name that a senior mentions when they are sharing. Ex: “I came because my neighbor Parker picked me up and brought me when I was a freshmen.”  Write down ‘Parker.’ You’ll use those names later.

8:30– It’s an older clip, but still works in painting a picture of leaving a legacy: ‘Lord Of The Rings Clip: Samwise the Brave‘

Sam: I wonder if we’ll ever be put into songs or tales.
Frodo: What?
Sam: I wonder if people will ever say, ‘Let’s hear about Frodo and the Ring.’ And they’ll say ‘Yes, that’s one of my favorite stories. Frodo was really courageous, wasn’t he, Dad?’ ‘Yes, my boy, the most famousest of hobbits. And that’s saying a lot.’
Frodo: You’ve left out one of the chief characters – Samwise the Brave. I want to hear more about Sam.
Frodo: Frodo wouldn’t have got far without Sam.
Sam: Now Mr. Frodo, you shouldn’t make fun; I was being serious.
Frodo: So was I.

8:35– “I wonder what people will say about you after you’ve graduated? I wonder if three years from now someone in the class of 2019 will be sitting at this meeting and mention your name.” Use the names you’ve recorded from their share time earlier and read those back to them.

8:40– Read the Burr Nichols story out loud. Make printouts of this PDF and ask a few seniors or adult leaders to take turns reading.

8:45- Appoint a leader to give a short ‘vision casting’ talk after the Burr Nichols story.

Below are some potential talking points:

Leave A Legacy: Give Your Life Away

The Power of Invitation

The Whys of Club

Pull back the curtain and go through a typical night at club and explain why certain things are done certain ways. Point out the different roles seniors can play in club. Use a dry erase board and see if they can come up with the club order. Always ask them “What’s next?” and “Why?” to see if they can come up with it on their own. Draw a funnel showing how club begins with a point of high activity and ends pointing to Jesus.

A Typical Night at Club

Whether you are a Sr. Leader or not, you have great influence as a senior. Here are a few ways you can be a leader at YL this year:

9:10– Invite all the seniors to pray out loud for their school

9:25– If you choose, you can close the meeting by asking folks to fill out Senior Surveys and include a nomination for a YL President.

9:30– It would be a fun surprise at the end to do a gutter ice cream sundae or reveal the new YL shirts.