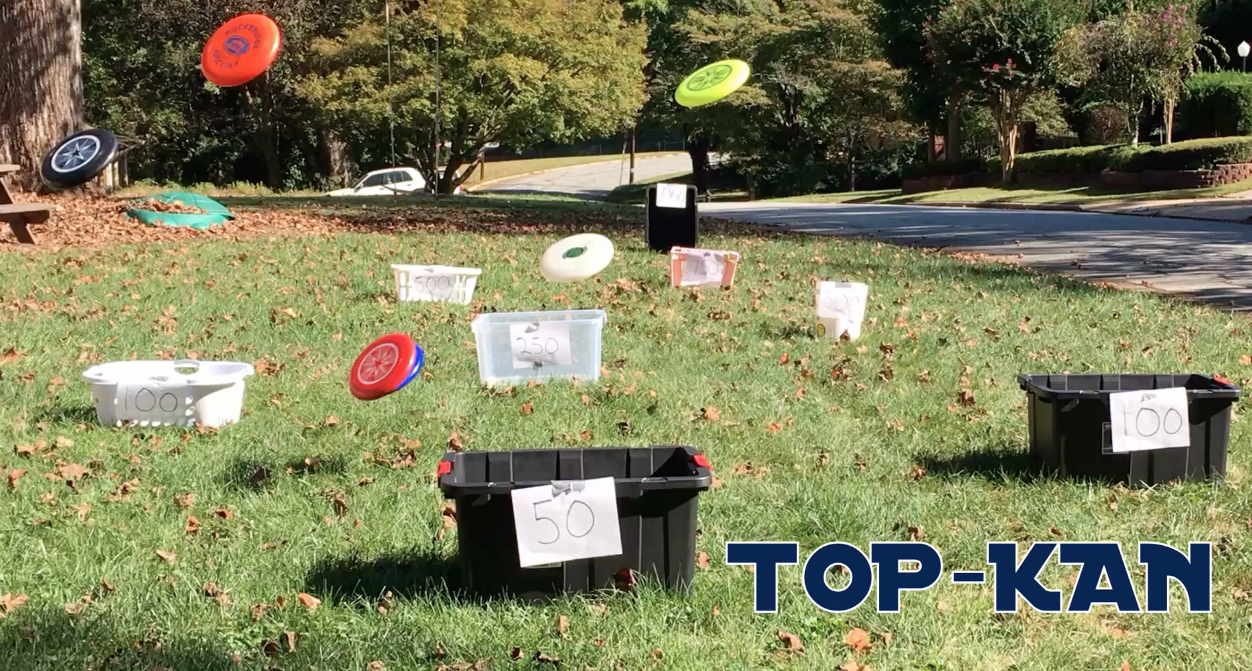 Some of you have experienced the wonder of playing “Top-Golf,” the driving range of the future. Many of you have played Kan-Jam, the yard game of the decade. Last week, we invented a game called “Top-Kan,” a combination of the two…and it was AWESOME!

WHAT YOU NEED TO PLAY TOP-KAN

– Borrow as many frisbees as you can. You could also add it other random objects you can throw, like stuffed animals. I think balls would be too easy.

– Get white printer paper, a thick sharpie, and tape.

– Set the buckets up in a field and tape different point values to each bin. Mark a “throwing line” using cones or tape or chalk.

– Test drive the throwing and make it difficult but do-able.

There are a few different ways you can play. We did 2 rounds, one as a mixer involving everyone and one as a game involving just 6 folks.

– Make sure to have at least 2 folks designated as score keepers. It helps if they have pen and paper to write down the scores.

– For the mixer, divide the group into 2 teams. Each team can pick 5 folks to be the “retrievers.” It would be funny and safer to make these folks where bike, hockey, lax or football helmets. Also a good excuse to interact with the Athletic Director or lacrosse team to borrow 10 helmets for the night.

– You can choose for each team to go at the same time, if you have enough space and buckets for two fields. We did it where each team went one at a time for a 3-minute round.

– Teams line up single-file and when the whistle blows, the timer starts, and they start throwing. As soon as a person tosses a frisbee, they run to the back of the line. The retrievers are gathering frisbees and running them back to the front of the line. *Don’t let retrievers throw the frisbees back, that will get too dangerous and complicated.

– Whichever team can get the most points in 3 minutes wins!

– After the team round, you can pick the best 6 throwers (3 from each team) to compete. Everyone gathers around to watch. Each thrower gets 5 shots. It’s an accuracy competition, not timed. Whoever has the most points total after 5 shots wins lunch with their leader later that week!

– This is also a great game to use if you’re doing a semester-long competition between teams.

Let us know if you play and how it goes! Send us a video and we’ll post it on the blog and social media. Enjoy!