The Complete Guide to a YL’d Bus Ride 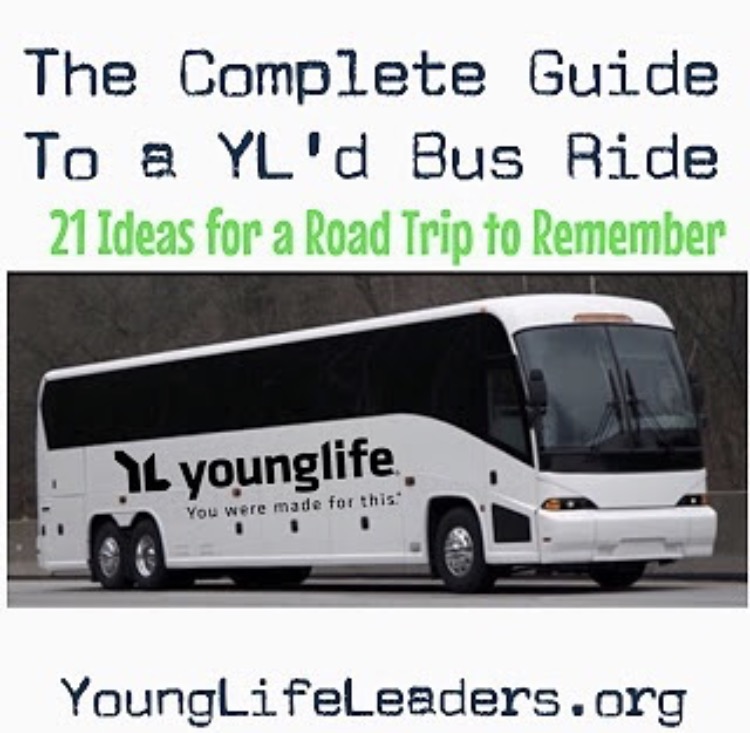 Many of you have LONG bus rides to camp this summer. Instead of enduring the ride, let’s make it one of the highlights of the trip. Below are tons of ideas stolen from many different Young Life leaders over the years.

Have you ever done program…ON A BUS?! This link has a full script, music suggestions, and all you need to know to pull off Bus-Program. It’s worth doing! How To Do Bus Program: A Run-on Skit For Your Ride To Camp

Thanks to YL Area Director, Zach Kreeger, for writing down some fun ideas of places for the bus to stop all across the country: Where To Stop On The Way To Camp.

The bus will stop fairly often. After those food/potty breaks, it’s an old YL tradition to play Willie Nelson’s “On The Road Again” as soon as the bus starts driving. The first two times you play it, kids might not even notice. By the third time, they’ll start to sing along. At the 13-hour driving mark, on your 5th stop, the kids will start booing, demanding you turn the song off. By the 12th stop, on your way home from camp, you’ll intentionally not play it…and kids will boo again, this time demanding it. It will become like Pavlov’s dog. How can the bus possibly move without Willie singing us along? Years from now, when these campers are parents themselves, they’ll hear ol’ Willie on the radio and remember the Best Week of Their Lives.

It’s easy to get stuck in your seat on the back of the bus and miss out on opportunities to meet new folks sitting up front. Odds are you have kids from multiple schools on one bus. Help them get to know one another before they get to camp. It will make their camp experience even better. Also, those relationships will motivate kids to be at All Area events like Summer Campaigners when you get back home.

If you bring an adapter, it’s fairly easy to connect your laptop to most Bus DVD player setups. If so, you can play some PowerPoint games and make them into contests for prizes. You can download some free ones here.

This is a great mixer to help folks get to know one another. If you can swing it, I’d create your own version based on the kids going on your trip. In the past, we took one specific fact about each person on the bus and had folks try to figure out who it was.

Another similar activity is to have everyone write down their most embarrassing memory. Collect them, then select the best ones. Pull up 3 people to whom the embarrassing moment could have potentially happened. Read the story out loud. Then give each a chance to explain more about what really happened. 2 of them will be lying, trying to pawn the story as their own. After all 3 have shared, offer a time for questions from the crowd. Then reveal the actual victim.

Make your own version of American Idol or The Voice! You can get Karaoke tracks of many songs on Spotify. Make sure to bring your dongle if you have an iPhoneX so you can connect it with the bus system.

Have kids write raps/poems about the trip and read them on the mic in front of everyone. A few years back we had 2 guys who rewrote the lyrics to “Hey There Delilah” and changed it to “Hey There Bus Driver.” They played guitar and sang it in the mic. Our driver loved it. The possibilities are endless.

Make sure to get on the good side of your bus driver so he/she will give you freedom to make the bus ride fun. A good way to make them happy is to keep that bus clean. Bring extra trash bags and collect it often!

If you have a long time between stops, it’s helpful to have a cooler with cold drinks/snacks. Tell kids ahead of time if you’re planning on selling them. You don’t want to hear “I paid $800 for this trip, I deserve a free coke.”