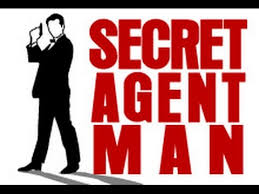 We typically play 3 to 4 rounds. It feels too long if you play beyond 4.

We pick a leader or a kid to be the “secret agent” of each round.

We tell the club there is a secret agent in our midst and the third person the agent talks to will be given a prize. Everyone in club is to introduce themselves to another person. Tell them your name and then pick a fun get to know you question. This week, we projected the following questions on the screen:

This is a great way to give our leaders and student leaders the opportunity to be intentional in seeking out the new kids.

As the first round goes on everyone is mingling and we play the song “Secret Agent Man” in the background.

When the third person talks with first-round secret agent the secret agent yells “winner winner chicken dinner” or something to that effect. Stop the music, the secret agent and winner come up front. The winner gets introduced to the club and they get to grab a prize. We have used cash, candy bars, gift cards for free burgers, movie, frozen yogurt, coffee, etc. with the catch of being able to redeem with a leader.

Seconds later, we announce there is ANOTHER secret agent amongst us! Same process ensues,

introduce yourself to others and tell them your name and answer another get to know you question. After the third person shares with the second round secret agent the secret agent announces that there is a winner and bring them up front to be introduced similar to the first round.

OK, one last secret agent is in our midst and repeat for a third time.

Robb Schreiber has led WyldLife for 20+ years. He is currently on WyldLife Staff in San Diego and the Southwest divisional WyldLife coordinator. Robb is a graduate of the University of Oregon.