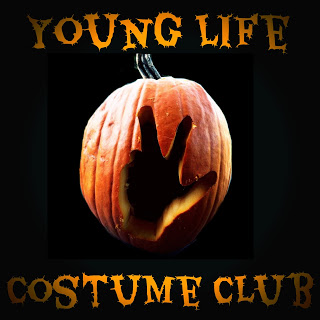 Who doesn’t love a YL style Costume Party? Below are a few ideas to help make it YL’d and festive.

If your club meets in a home, check with your host to see if it’s a good neighborhood to pull off this scavenger hunt. It’s similar to “Bigger, Better, Best,” but teams are searching for items to collect in order to make a costume for one of the team members. Divide up into teams of around 5 folks. Each team picks one person to dress up and one or two streets to hunt on. Don’t let teams overlap streets and hit up the same house. Teams go door-to-door, asking at each home for one or two items they can use in creating a costume for their model. At one house they may get an old hat, at another some lipstick, at another a wig, and so on. Set a time limit, and a limit of 2 items per house. When teams report back to club, hold a competition for the best costume.

It’s a great night to get some photos to post on Instagram throughout the week. Ask a high schooler to shoot the pics and post them up.

Here’s a video you could have playing on the screen as kids enter the club room. It’s old school, but still fun- a Halloween light show to Gangnam Style.

Use JibJab to make a Monster video with pics of 5 of your YL kiddos. It costs $ to download the video, but makes a funny transition between different club elements.

Costume Contest
Instead of your typical club mixer, hold a costume contest. Build a runway. Invite everyone wearing costumes to participate. Identify the best costumes before club starts, as those folks cross centerstage, pull them aside. Once you have the top 5 and everyone else is sitting down, vote by audience applause. Award 3 prize catergories: Creative, Insane, & Hilarious. Give a good prize.

This works well with a smaller club or larger Campaigners group. Divide into teams of 3 people per pumpkin. Give each a good cutting knife and ask them to be careful. Works best if there can be a leader with each team. They have 3 minutes to cut the pumpkin into 10 pieces. Play music while they cut (see songs below). Then have the teams rotate to a different pumpkin. Have a ton of round wooden toothpicks available. Give each team just 2 minutes to put the jigsaw puzzle pumpkin back together, using the toothpicks to hold the pieces in place. The first team to finish is the winner. Pumpkins must be able to stand alone to be considered.

Seed Spittin’
Kids race to cut open a pumpkin, pull out the seeds and spit them towards their partners who are holding a plastic jack-o-lantern. The one with the most seeds after 90 seconds (with loud music playing in the background) is the winner.

Check out this link for all the details!

If your club meets after Halloween, you can likely get really cheap pumpkins. If you have 30 kids at club, buy 90 pumpkins, so you have around 3/kid. Divide into at least four teams for the Olympic events. It’s messy, so have them dress appropriately. Below are 8 different events you could use.

Make sure the winning team takes home a prize!

*We found some of these great games on YouthSpecialties.com.