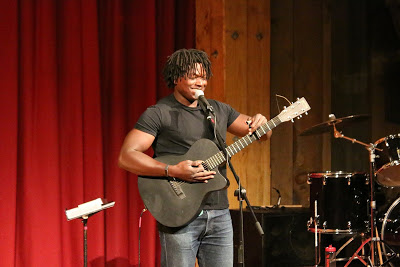 Our featured Camp Musician for the month of September is James Tutson. You may have heard his music on the new Young Life podcast, “On the Frontier.” James was featured as the first guest in episode one.

He was first introduced to Young Life as a freshman in high school alongside his older brother. In YL, he discovered there was life in Christ and has been hooked ever since.

This July, James served as the camp musician and also on the program team. He was a “back up, back up dancer” named Bebo and an Uber driver named Craiggers.

James and his wife both serve on staff in his hometown of Iowa City, IA. He is currently starting a collective of YL musicians making a new video series and music/merchandise campaign to benefit a number of charities including Young Life.

You can find James’ music at JamesTutson.com

His latest projects are Red Hot Riot – EP and On Me.

Email James to play at your Young Life camp or banquet!

What other Area Directors are saying about James

“James is the Swiss army knife of camp work. But not in that ‘decent at a lot of things, but not exceptional at anything’ kind of way. James is incredibly gifted in just about everything he does. His music is soulful, real, and full of depth. He writes and performs the kind of music that young people crave—the kind of music that speaks from and to the heart.

James not only preached the Gospel through his music, but also through his story in Real Life, his goofy role on our program team, the worship sessions he led for our assigned team, work crew, and summer staff, as well as the numerous rounds of Frisbee golf he played with campers. To be honest, I’m not sure where he found the time to serve in so many ways! To top it all off, James is approachable and personable and he always has time for a conversation. His confidence in, and love for, the Lord just radiates off of him and you can tell that James knows this whole thing isn’t ultimately about him. In short, you would be lucky to have James on your team of any kind!”

“James is an extraordinarily gifted musician. Unmatched. What I admire most is who he is as a person. He personifies humility, tenderness, and grace. In a world where it seems everyone is shouting, “Look at me, don’t you think I’m so great and cool?”–James does nothing to draw attention to himself. He is true and real…rare traits for which I have huge respect.”

“James Tutson is one of the best camp musicians in the mission of Young Life. With experience as a YL leader, staff person, and program director, he GETS Young Life and brings infinitely more to the table than just his musical ability.

James’ music is heartfelt, honest, and real. Whether leading worship or performing his own folk/soul originals, he engages his listeners and intentionally uses his music, and his story, to supplement the Gospel presentation and point towards Jesus.

I’ve seen James lead music and perform at leader retreats, weekend camps, and summer assignments; in every instance, he makes the entire event better. When not leading music, you can find James spending quality time with staff, leaders, and kids: especially on the basketball court or the frisbee golf course. His ability to connect with people is one of his most endearing gifts to Young Life. He is always flexible, and willing to serve in any capacity necessary. Although his passion is music, he doubles as a hilarious program director, and is a unparalleled addition to any team in any role.

James is beloved by staff, leaders, and kids across the Midwest. He is smart, humble, and creative. He does everything with excellence, joy, and a focus on furthering the kingdom. We love James Tutson, and I know you will too!”