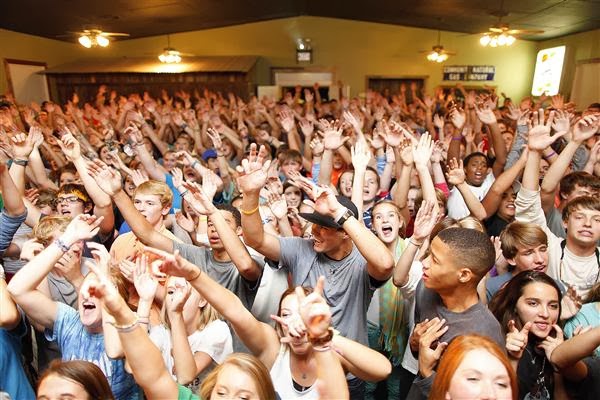 Drama teachers, mimes, game show hosts, or you can run the game with your weekly run-on characters.

Call 1 guy and 1 gal up front to compete. Divide into two teams, guys vs gals. Instead of the person on stage acting out the charades word, the crowd becomes the actors and the contestant becomes the guesse. When it’s the guys’ turn, all the fellas stand up. The game show music starts and Round 1 begins. They have 30 seconds to get the contestant to guess as many words as possible. Behind the contestant, words will come on on the screen that only the crowd can see. After the 30 seconds, use a buzzer sound bite to let everyone know that round is complete.  Have another student on stage keeping score for their team on a white board or posterboard. Alternate turns, the guys sit down, the gals stand up. Do 3 rounds. Winning team gets a 30 second back massage-karate chop from the losing team.