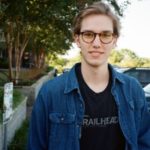 We’re excited to share with you a song by John T. Martin called “What if it’s True?“

We think it would be great to play along with a club talk or at Campaigners. You could show the beautiful lyric video below so kids could read along as John T. sings.

Listen to the song on Spotify or Apple Music.

We asked John T. to tell us how the song came about…

“Oh Man, what an experience. My dad is a New York Times best-selling author of fourteen novels and has had one (soon to be two) of his books, such as The Mountain Between Us, turned into major films by movie companies such as 20th Century Fox. His books have been printed in forty different languages. Is all of that necessary for the story of the song? Not really. But, I do love bragging on my dad!

It is important, however, that you know that his first 13 books were all fiction stories. His 14th book is called, “What If It’s True?: A Storytellers Journey With Jesus.”

My dad has been walking faithfully with the Lord for all of his life and one morning, over a cup of coffee, sat down with his Bible and begged the question “If every word here is true, who does that make You? And who does that make me?”. He soon began his year-long process of deciphering of the stories he’d read a thousand times.

Soon after the release of his book, his publisher approached me and asked if I could write a song to go along with it. They told me they would put me in a studio on music row in Nashville and let me record it. I felt two emotions after learning this: joy and intimidation.

As a musician, I’ve dreamed about recording on music row. Sure it’s just a street, but all of my heroes recorded their best stuff on that street and a part of me liked the idea of standing in their shoes for a day. But the intimidation spoke louder than the joy. The music row recording studio scenario wasn’t happening without a song. A good song. My dad has published over a million and a half words and I’m here trying to find a few that capture the truth in his book. So I sat down with “Jimmy” (the name of my Martin D-28 guitar) and failed. Miserably. Actually, I failed twice. I wrote two different songs that technically sounded good but had more me than Jesus at the center. And that never ends well.

The problem wasn’t that I didn’t have enough information to write the song. It was me. I was getting in the way of what the Lord was trying to communicate. But I didn’t know that at the time. So I called my old man. He laughed when he heard the frustration in my voice and said “welcome to my world”. He then proceeded to tell me that “the song is already written. It’s not yours to begin with just like the book isn’t mine. You just need to ask Him to let you hear it.”

I then heard the first line of the song in my head, hung up on dad, and wrote this song in 10 minutes. Is it perfect? Probably not. But the heart behind it is to point to Jesus. So I’m okay with it. I was then put on music row in a studio where forty years earlier, a little girl named Amy Grant walked in with her guitar and changed the music world.

John T. Martin is a songwriting major at Belmont University in Nashville, TN. He has been involved with Young Life for most of his life and has spent the last three summers in Colorado at Trail West Lodge on Work Crew and Summer Staff.