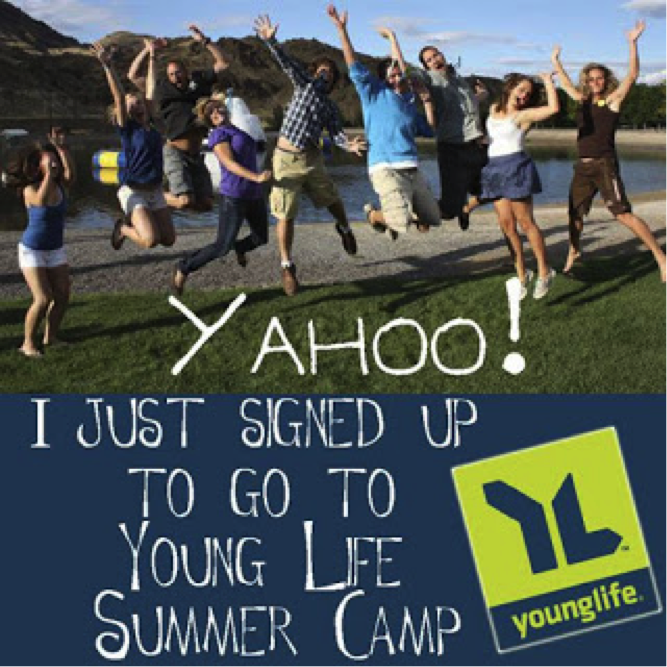 It’s time to get your middle and high school friends signed up for the BEST WEEK OF THEIR LIVES!

Over the next 5 Wednesdays, we’ll look at the top five excuses kids make for not going to camp. Today we look at how to respond to the first.

The Problem: My Friends Aren’t Going

This is the big one, and it makes total sense. We wouldn’t go to a two-hour party, much less an eight-day trip if none of our friends were going…so why should we expect our middle and high school friends to do the same?

The Solution: Getting Them To Go With A Group Of Their Friends

One way I’ve found to make this happen is by making a smaller ask. Asking kids to pay hundreds of dollars and commit a week of their summer is a big request. Asking kids to meet for dinner is much more doable.

Why not invite a group of your high school friends over next weekend for dinner? Co-ed groups can actually work better because when you get the gals to go, the guys will want to go, and vice versa. After you’ve had fun hanging out at the dinner, invite them to check out a short surprise presentation.

Below are some keys to the presentation.

Open with a short speech: “Ok, I’m going to be honest with y’all, I invited you here tonight for dinner, but I have so much fun hanging with y’all that I didn’t want it to end, so in addition to us spending 2 hours together tonight, I wanted to seize the moment and ask you to give me 20 minutes to convince you to spend 200 hours with me this summer.”

Don’t show the 2-minute camp video you’ve been showing as a promo at club. Instead, show the video scrapbook from last summer, starring people they know and recognize from their high school. Yeah, it will spoil a few of the surprises, but it’s a small price to pay for the powerful impact it will have on showing them what they’re missing out on.

Get a camper who went last year to come and share a few reasons why they think everyone should go. Prep the student ahead of time and practice their pitch with them.

In addition to handing them camp forms, send home with them a personalized letter detailing the fundraising plan and anticipating questions parents might ask.

Give them an immediate next step with incentive. Talk with your Area Director and see if the area can throw any camp scholarship $ at this (or better yet, try to raise it yourself.) Then offer $50 off camp to the first two folks to bring you a filled out form along with the deposit. Once you knock down two dominoes, the rest start to fall.

We’ve got to realize that individually most high schoolers aren’t going to call their friends and say “Let’s go on this trip together.” Few have the confidence to do that. But if you get them in the same room, all nodding their heads at the same time, that fear of being alone quickly fades.

As Rindercella would say, “The storal of the moray is this…”

Instead of asking for a camp deposit and a week of their life, convince them to give you two hours for a free burger. Once you can get their attention in a smaller non-club environment, you’ll have the platform to make the bigger ask.

Next week we’ll look at how to address the fundraising problem.