The First Ever Young Life Club: The Burr Nichols Story 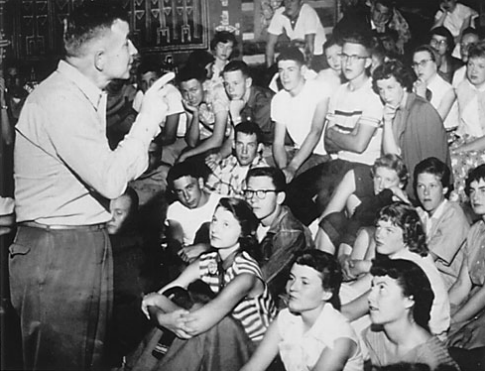 Whenever classes and clubs start back each fall I love to read back over the story of the first Young Life club. It’s a beautiful reminder of why we do what we do. It’s a true story from 75+ years ago. It’s a story of a ministry founded on prayer. It’s a story about contact work. It’s a story about Burr Nichols- a high school football star whose life was forever changed by an encounter with Jesus.

During the 1938-39 school year, Jim Rayburn decided to take a part-time job with a Gainesville, Texas, church. Jim was the assistant pastor in charge of young people; Clyde Kennedy, a minister with progressive ideas, was his boss.

“Together the two men hashed out a novel idea that Jim would work with unchurched kids exclusively, instead of with those who already attended. Nothing suited Jim better than this approach. Experiences in the Southwest had taught him that most high school kids avoid church if given a choice. Besides, Jim wasn’t fond of titles such as “minister,” “youth worker,” or “pastor,” and he had a real aversion to black robes, clerical collars, and religious garb. Armed with a soft spot in his heart for kids, and a burning love affair with God, Jim headed for the local high school. Little did anyone suspect how far-reaching his efforts would be.

“Through Clyde Kennedy, his path crossed that of a Mrs. McClusky, a lady who was also working with high school students; she and her club hostesses called their group the “Miracle Book Club.” At first, progress was slow and results were disappointing. For a man who loved to think big, this was a major disappointment; his “Miracle Book Club” was working no miracle.

Jim recalled: “I didn’t know how to run a club. I started having it in the afternoon, after school. I’d talked the school into giving me a classroom. I started with three kids. One of them turned out to be a Christian, and the other two didn’t turn out to be anything. I got it up as high as eleven that year, but I’m telling you, it was the saddest bunch of sacks you ever saw in your life. If you want to really see a bunch of sad apples, just have a meeting for the kids who’ll stay after school. I got the biggest selection of teacher’s pets you ever saw, not a red corpuscle in the whole crowd. Everybody I wanted to reach was out on the football field, and every place else, right while we were having our club meeting. After nine months of that, I knew I had to try something else.”

“In January of 1940, Jim changed the format from after school to early evening and the meetings were moved into the homes of various students. “What a change! I started having lively meetings. Two or three kids came out who were really sharp and could do something with the rest of the bunch. Right at the start, the Lord got hold of two kids. One of them was Viddie Sewell. She was the very first youngster that was ever led to the Lord Jesus Christ in a club of mine.”

“We decided we’d have a prayer meeting, those two kids and me. In the pastor’s study that Sunday night, we started to pray for the club. The pastor met with us. He was pushing on me all the time. He didn’t care if I did any work around the church. He just wanted to see those kids reached for Christ. He said, “Don’t you monkey around with people who come to church. I’ll take care of them. You go on down to that high school. Boy, now just think of that. I wonder what would happen if there were more pastors like that. He just said, boy, I’m not doing so badly with the people who are coming to church. The thing that’s bothering me is all those people who don’t come. Somebody go out and get them. That’s what the church is all about, really.”

“You can’t read the book of Acts, you can’t read the New Testament, you can’t read of the life and ministry of Jesus Christ, without coming to the conclusion that that’s what the church is here for, to go after others. And why it can sometimes be such a colossal flop because it’s so ingrown. Nobody hears the message except those who have always heard it, and they’re not going to do anything about it, so nothing happens.

This guy just kept pushing me and pushing me and pushing me, and out I went. I don’t even think the prayer meeting was my idea. We had twelve kids at our club meeting the night those two kids came through for the Lord, and we decided to have this prayer meeting, and the next we had twenty-three. And boy, we have another prayer meeting, a prayer meeting that wouldn’t quit. The next week we hard thirty-two. And then we had another prayer meeting, and the school was really out then. The next night we met in the biggest home in the whole town, and we had fifty-one. And right at the end of the meeting, one of the toughest kids in the senior class got up and said, “Wait a minute, I wanted to tell you that I accepted Jesus Christ while Jim was talking.” It was like a bomb dropped in the place. None of us had ever heard of anything like that. It was Wonderful!”

“One or two others that had gotten “waked up” joined the prayer meeting the next Sunday night, and from fifty-one we went to sixty-two, and from sixty-two to seventy-five.  We two meetings of seventy-five, and kept praying.”

“A beautiful little blond girl, the school beauty queen, came to know the Savior and joined in that prayer meeting. She had never been in a prayer meeting in her whole life. We were praying around in a circle, taking turns, and she heard us praying for Burr Nichols, the captain of the football team. As soon as we raised our heads up from prayer, this little blond girl piped up and said, “I!ll get Burr! She was going with him, and said she’d bring him to the next meeting. Just like that! That prayer was answered fast.”

“We started the next meeting, and that night I’ll never forget. It was crowded in that hall where we were meeting. It was a big front hall, but seventy-five people are a lot of people for a hall. They were sitting on the floor, and I was crammed up against the front door. I kept looking for this blond girl and Burr Nichols. They weren’t there.”

“We went through the songs, and it was time for my message. I’d stalled as long as I could, and just as I was getting up to speak, there came a clomp, clomp, clomp across the front porch. That door busted open behind me and here was this little blond cutie and Burr Nichols right behind her. She just pranced in and sat down in front of me.

That was the only space on the whole floor. And there was Burr standing in front of that whole crowd; he turned around and sunk down beside her.”

“Well, I started in, and I was scared to death. I was just shaking in my boots. I gave the Gospel the best I knew. Burr hadn’t been at the beginning of the meeting, he hadn’t heard any of the singing or anything, but something about it he likes. He came around afterward and stuck out his big mitt, shook my hand, and said, “Boy, Jim, I liked that. I’m coming back next week.”

“Next week we started off with the same situation-a big crowd jammed up against the front door, but Burr Nichols wasn’t there. I went all the through and came to the message time again. I saw the little blond girl in the audience and thought, uh-oh, they’ve had a divorce this week.”

“Just as I started to speak, there came this awful clomp, clomp, clomp across the front porch. Burr opened the front door and came in like he owned the place. He walked past me and said, “Jim, I wouldn’t have been so late, but I couldn’t find some of these guys.” And four teammates came trailing in behind him.”

“I found out that across the street from the high school a group of elderly women had been meeting for six years, every Monday morning, getting down on their knees in the living room of dear old Mrs. Frasier’s. They prayed every Monday morning for six years, long before I ever heard of Gainesville, Texas, for the high school kids across the street. I was there a year before I heard of that prayer meeting. I used to go over there with those five or six old ladies and get down on my knees with them after that club started to roll. That was the thing the Lord used to start it.”

“Back in seminary, a group of kids going to school got interested in the club and started to pray. They’d meet every Monday night and pray while I went to the club meeting in Gainesville. They’d get down on their knees and spend hours praying for that club meeting. It’s no wonder we have a revival in that school.”

“That’s how Young Life started. I didn’t have in my mind to start anything but the club went from 75 to 96, and then to 100, and then to 119, and 135, and the week before finals there 170 kids there. Burr Nichols closed in with the Savior about the fifth night he ever heard the gospel. That fall Burr went to Dallas to spot players for the announcer at one of their games. Riding back they had a terrible accident and Burr was killed. His folks wanted me to preach the funeral. They said I was the only preacher Burr had ever listened to.”

“Burr grew up on the wrong side of the tracks and was regular ruffian. All the Lord was waiting for was somebody to get a little bit interested in Burr – a little blond beauty queen and a little pip-squeak theological student. Burr was a precious soul for whom the Lord died. This country is full of people like that. There are thousands of people in this country that no Christian has ever said a kind word to. Most of the kids in this nation are like that. A few million more of them will graduate from high school this year. Just like Burr Nichols, they never heard the story and I can’t stand that.”

(Thanks to Brian Summerall for putting this PDF together.)