Some of your Young Life teammates might be entering a season of transition. Maybe they’re graduating, moving, burned out or called to another ministry.

Their absence will be noticed. Not just by you or your team, but by their middle and high school friends. Change is hard. Trust is expensive. Abandonment issues are real.

Would you consider sharing this post with any of your teammates who are transitioning out of being a YL leader? Hopefully, it can help them and the middle and high school friends they’ll leave behind.

How to Say Goodbye to our Middle and High School Friends?

Years ago I worked at The Dale House Project in Colorado Springs, a residential care facility that was started in partnership with Young Life. It’s a home for at-risk teenagers with no place to go.

During my one year internship, our house counselor, Jim Sheffer, spent time training us how to say goodbye. He was firm in urging us to not make promises we couldn’t keep. The specific population of kids we were working with had been repeatedly abandoned and rejected by their families and friends. Now we’d come into their lives for a short time, loved them in a way they had never experienced before, and soon we’d be leaving them as well. Leaving hurt deeply, both us and the kids.

Jim encouraged us to speak to the kids in a language that was honest, loving, and leaving. He prompted us to say things like:

In this digital age we have the tendency to make false promises. We think because we’re Facebook friends or follow one another on SnapChat, we can be real friends, when in reality it’s much more difficult when your paths aren’t regularly crossing in person. In our busy lives, the old adage is typically true: “Out of sight, out of mind.” 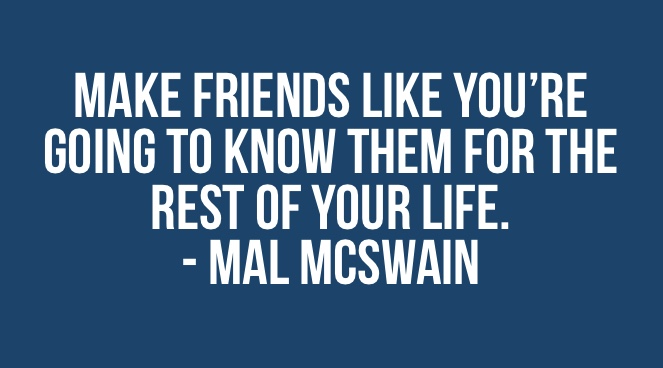 Dunbar’s number asserts that we all have a relational capacity of around 150 people. Yet when I became a Young Life leader Mal McSwain told me to “make friends like you’re going to know them for the rest of your life.” That year alone I became friends with over 150 high schoolers, and now, almost 20 years later, those numbers have continued to grow.

I think I missed one key word during that YL Leader training. “Make friends LIKE you are going to know them for the rest of your life.” As leaders, we are to befriend kids with the mentality that we would love to be a groomsman or bridesmaid in their wedding one day, to be roasting them at their 40th birthday party, to be old friends on that “Young Life 100th Birthday Caribbean Cruise” in 2041.”

We must also not be so arrogant to think that without us in their lives, they’ll never know Christ or have others love them and influence them in the way of Jesus. God calls people in and out of our lives for specific seasons.

The reality is that we’re not going to know all of our middle and high school friends for the rest of our lives. So…we must learn how to say goodbye.

If you are leaving…

You’ll Be Missed More Than You Know

Do not assume kids won’t notice that you’re gone. Whether you realize it or not, you are one of the only “adult friends” these teenagers have. They most likely feel closer to you than you feel to them. Even though they sometimes act like they don’t even know you when you show up in the cafeteria or to a game, they’ll notice when you are gone. It will be a loss for them and a big loss for many of them.

When leaving, we must be intentional to actually say goodbye. It is easier to just leave without the hoopla, but kids need to know the truth. They need to hear it from you, not someone else. If you asked them to trust you and to be your friend, you at least owe them the time to tell them goodbye. In some cases, it may be complicated as to why you are leaving, but it’s important for you to give kids an honest, clear, and well thought through explanation. You don’t owe them all the details, but you at least owe them a reason for why you are leaving them.

Maybe you are leaving under not so great circumstances. Maybe you had a fall out with a teammate or a staff person. Maybe you’re not a fan of the way things are being run. Even if you are leaving with tension, don’t tear down others or verbally attack the ministry. Revenge doesn’t mean that you win, it means that everyone loses. Choose your words carefully. Be truthful, but speak with grace.

When a kid calls and tells you that “Young Life sucks since you left,” encourage them to step up and be a leader instead of a critic. Be positive and support the leadership that is in place. Your voice still carries weight and influences the direction of the ministry.

Tell them that you are sad that your relationship will never again be the same. Acknowledge the loss and hurt that comes with goodbyes.

Not from many kids, but probably from the ones you are closest too. They have a right to be angry. You’ve chosen something else instead of them. But choices are part of life. Jesus chose only twelve disciples. He chose to spend more time with only three of them. Our choices affect others. Many kids have been wounded by one day coming home to find out their mom or dad has moved out. Many of them have experienced real abandonment and they will be angry with you, and maybe even God. As I have moved I have had kids say to me, “You’re leaving me just like everyone else in my life leaves me.” We’ve got to trust that God is in control and if we are being obedient to Him, then His plan is for the ultimate good, even when it results in anger and hurt.

It’s your responsibility to do your best to set up the kids you’re leaving with another YL leader or someone else who can invest in their life. While it’s easier to just roll out, it’s worth the extra effort to introduce the new leaders to kids and even create hang out events where the new leader can be set up well to begin to earn the right to be heard. Also, be strategic in introducing new leaders to school faculty and parents of kids that you know. A true sign of good leadership is the success of an organization after a leader leaves.