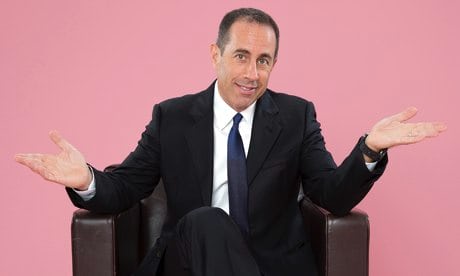 I recently listened to a brillant conversation between comedian legends Jerry Seinfeld and Larry Wilde. Larry interviewed Jerry on the topic of stand-up comedy. You can listen to it here on Spotify.

So much of what Jerry discusses is also super-applicable for giving Young Life talks, so I took a few notes to pass on below.

I didn’t use all 20 tracks of the interview but selected a few that were more relevant. Jerry and Larry’s words are italicized. Mine are not.

When speaking about a comedian named Robert Klein that Jerry likes, he said, “He seemed to me like a guy I knew. [Other comedians] were funny, but I didn’t know anyone like them. Robert Klein seemed like a real guy, he reminded me of myself, I thought- I could be friends with him.”

Being relatable and approachable is crucial when giving a talk. When thinking of examples and illustrations, it’s important to try and relate with every kid in the room. Don’t alway just use sports illustrations, make sure to connect with the kids who aren’t into sports as well.

“The thing about learning comedy is that you can’t train for it off-stage. To actually perform stand-up, you must get on stage and do it. You learn by doing. In my first years of doing stand-up in New York, I’m sure I went 18 months without missing a single night, and I’d usually do at least 2 shows a night…. and I tape recorded the shows to find where the laughs were.”

That’s nuts- that he went 540 nights in a row doing a routine on any stage he could!  If we want to grow as communicators of the Gospel, then it’s going to take lots of practice. Give talks anywhere you can. My preaching professor in seminary encouraged us to knock on as many doors as possible to practice preaching- smaller churches who needed “pulpit fill,” nursing homes, VBS, youth groups, etc… What if you even wrote Young Life talks just for practice and gathered your friends or Campaigners group together in your living room on a Saturday night and asked them to give you feedback? You could also give talks alone in your room and record them on your phone and send them to friends asking for feedback.

In regards to Jerry’s first time doing stand-up on The Tonight Show, “I prepared rigorously. It was an opportunity that I wasn’t going to blow. I probably practiced my 5-minute routine 200 times. You know when you get out there, you’re going to be under such pressure. I’d practiced it so much, someone could be slapping me the whole time and I still could have delivered it. Security is knowing your lines.”

Before you give a talk at club, have you given it the practice and time it deserves?

“I watched the re-run of my Letterman gig. My pacing was off. I was out of rhythm with my audience. You have to let the laughs breathe. Every comic has their own organic rhythm. You have to pay attention to the audience. Really good comedy is a dialogue. Their laughs are as important as what I’m saying.”

When we’re giving Young Life talks, it’s important to talk WITH your teenage friends and not AT them. Are you looking them in the eye? Watching how they respond to your words?

“I watch tapes of myself and pay attention to gestures that are repeated too much. It becomes a distracting thing and hurts the line. When you’re a comedian, you have to analyze every aspect of how you communicate so you can improve it. Being a comedian is an exploration of yourself. You have to figure out who you are and express it well.”

It’s easy in Young Life to watch your Area Director or Camp Speaker give a talk and then to try and imitate them. That works on some levels, because they are experienced at their craft and we can learn much from them. But on many levels, it doesn’t work. God created you uniquely and you have to figure out how to speak in your own style that is true to God’s design of you.

Jerry’s comedy comes out of observations of everyday life. He says, “I like to look at something that seems so trivial- like cotton balls, or the type of faucets they have at airport sinks, or wondering how much milk you have in your refrigerator.”

The best talks we can give will come out of us spending time observing Jesus in the Scriptures and imagining what it would have been like to witness the scene in person. Then, we can smell the sea of Galilee and help bring the Scriptures to life for our middle, high school, and college friends.

But we also get to observe them. We get to pay attention to what is going on in their lives and their schools. When we know them well, we’re able to use real life examples that make them nod and feel understood.

Jerry also talks on this track about ‘Human Cartooning’- the art of making pictures with words. He says, “I do a thing about the candy at the movie theatres: giant boxes of candy and irrationally large popcorn bowls. We look like ants carrying food. They might laugh at the idea, but they’ll also laugh at a person on stage trying to imitate things using just your body. Pretending to be an ant carrying the popcorn box….How can I express this physically on stage? The first two years I did comedy, it was just from my nose to my chin- that was the whole act. Then I explored explaining things with body language.”

Jerry says, “I never just think of a joke and do it and that’s the end of it. I explore each notion as far as I can. I do it on and off stage. I put a lot of thought into it. I will spend an hour trying to get an 8-word line down to five. That’s part of what makes the joke. Editing and the economy of a joke. You recognize how important one or two words can be.”

One of the hardest parts of writing a talk is editing it down. I typically open a Word Doc and jot all my thoughts down. I copy and paste commentaries in there. I have a section for the intro, the scripture, the conclusion, and a separate section for illustration ideas. Typically by the time I collect all my notes it’ll be a 15 page doc. Then I title it, “Unused talk stuff 2.27.18.” Next, I open another Word doc and title it “Club Talk Final Notes 2.27.18.” I cut and paste and move things around and edit that 15-page doc down to 4-5. I usually plan for 4 minutes/page. Then, I edit those pages down some more in order to get the talk around 15 mins. Lastly, I practice it and learn it to where I only need 1 page of bullet-pointed notes to remind me of a few key things I want to make sure to say. It takes LOTS of editing to get that final version of that talk!

Larry asks, “Is there something about the security of doing the lines over and over and knowing that the laugh is there?” and Jerry responds, “Yes. You can’t have too much confidence. The more you believe in a thought, the funnier it seems to get.”

Jerry said, “There’s a great premium on originality. Just being funny isn’t enough for audiences these days. They really want a person with uniqueness. Everyone is funny in a different way.People want to know the person behind the work. It’s important that you reveal yourself through the comedy.”

When you’re giving a club talk, be willing to pull back the curtain and bear your soul, at least a little. Find the tension between sharing enough about your own life that folks get to know the-real-you, and not talking about yourself the whole time. Keep Jesus as the focal point of your talk, but don’t afraid to share about yourself either.

Jerry said, “Audiences will teach you what’s funny about you if you pay attention to their responses. The comedian has to have the courage to take a chance. It’s always difficult to do something new.”

When I preached at church this past week, I was preaching on the Psalms of Lament. All week long as I prepared, I was singing this one particular song of lament in my head. I felt like I should sing it to begin my sermon, but felt insecure about doing it. I can lead club music, but I’m not a solo kind of singer. Despite that, I followed the Lord’s nudge, and went with it. I tried something new. And by God’s grace, it worked. It took some courage and it took taking a chance. Now, I’ve surely taken chances in talks before that haven’t turned out as well, but that doesn’t mean we should stop trying. How does God want to use your courage and creativity to speak to your teenage friends?

Jerry said, “I don’t like to misrepresent anything. I would never say anything mean about my parents just to get a laugh. I try to work from my real feelings about things.I’d rather not be dishonest about it. If I’m making something up, it would be too hard for me to perform because the way I work is from a natural enthusiasm about all of these things, and I can’t manufacture that enthusiasm. It has to be real. The audience can pick that up.”

Sometimes it’s tempting to make up stories and to not be honest, just to try and get a laugh. It might work in the short run, but eventually, the audience will pick up on the lack of authenticity. Trust is hard to earn and easy to lose.

Jerry said of his audience, “You have to love those people out there for some unexplainable reason and be willing to take a chance on perhaps embarrassing yourself so that they can have a good time. You have to like the people and really want your audience to have fun.”

Do you love the kids you’re speaking to? They can tell. The best club talks start in school cafeterias and practice fields – by showing up in kids’ lives and earning the right to be heard.

And the best club talks also start in private places- prayer rooms, prayer closets, and on our knees beside our beds.

Lord, give us the confidence and the passion to speak of you with clarity and affection. Amen.

Will You Drink the Wine?