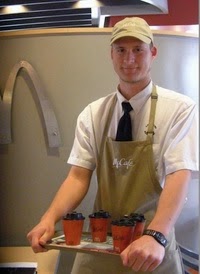 A few years ago we found out we were getting a new leader in our area. He was moving to our town just a few weeks before camp. Instead of letting him jump in right away, we came up with a fun way to introduce him to the kids.

Another leader in our area had a relative who owned a McDonald’s right off the highway about an hour north of us (on our way to summer camp.) We had Nick drive up a little early to that Mickey D’s to meet the store owner, get a uniform, and get to “work.” Not long after he started his “new job,” our camp bus made our first bathroom stop, and ‘it happened’ to just be at the very same Golden Arches.

Kids poured off the bus and into the restaurant where Nick was sweeping the floor. He began talking with some kids, asking what they were doing and where they were going. He pretended to have just graduated from high school 2 weeks before. I proceeded to walk in, introduce myself to him and “jokingly” invite him to come along with us to Woodleaf.

Kids listened in as Nick began to get more “interested.” After a short conversation with me (in front of the kids) he called his “mom” and explained to her that this Young Life group had stopped at his McDonald’s and they had a camper dropout at the last minute and there was a spot on the bus headed to California that was paid for, completely free to him. He asked her if he could go, then handed me the phone.

At this point, our kids began freaking out. “Is this really happening? Will this random dude really come with us to camp?” I handed him back the phone and told him that he could sign the forms since he had just turned 18 and that his mom was good with him going if he wanted to. He then proceeded to say that he really couldn’t cause he didn’t have any suitcase packed and he had to work. I ask the kids listening, which was almost the whole group by this point, if Nick could borrow clothes from them for the week and they replied “of course!” They were experiencing a combination of disbelief and excitement. We’d promised them a memorable adventure!

Within 10 minutes I had talked to Nick’s “boss” and he was on the bus. Some of the girls were already hitting on him. (That part got a little awkward for Nick.)

An hour later down the road, with kids still confused about this unreal scenario, I got a call from a concerned mom who had been texting with her daughter who was on the bus. She was concerned that we had let a kid on the trip whom no one knew. Before things got more out of hand, we decided to end the prank and Nick went to “use the bus bathroom” where we’d stashed an afro and costume. We then announced from the front of the bus that we would like to introduce our newest YL leader, played some hip hop, and Nick strolled down the aisle giving high fives to confused teenagers. Slowly they realized they had been Punk’d.

Maybe you can steal a variation of this idea to spice up your bus ride to summer camp? Creativity is just forgetting where you stole it from.