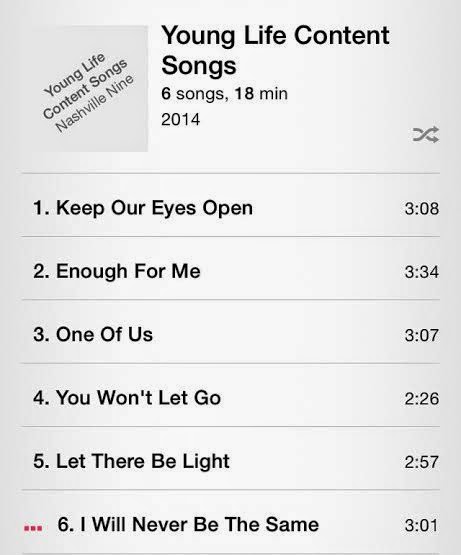 ‘The Nashville Nine’ are 9 anonymous musicians who love Young Life and wrote these songs below as a gift to the mission. The songs are incredible and we’ll be singing them this summer at Young Life camps around the country. Below is a letter from one of the artists explaining how these songs came to be.

“During our planning meetings to prepare for our Camp Musician Training time at Sharptop last March, there was a long conversation about the need for more updated ‘content’ songs for Club Music, specifically, tying in with the Club Talk progression at summer camps. Knowing the power of music in unifying kids from all different backgrounds, we all agreed that the older club songs aren’t bad, but rather ‘out of date.’ So our desire was to fill that need by writing songs that are more current in popular melody and vibe, that will use more current and understandable language and continue to be easily accessible and engaging for our teenage friends. Songs that feel like current pop songs, but that offer more redemptive and lyrical depth. With the ever changing music scene and pop radio, staying musically relevant and hip is incredibly important especially in our desire to create as many connection/entry points as possible for our friends at camp.

So nine Nashville artists, all with amazing Young Life stories and camp experience, gathered for two separate times with a very distinct purpose – to come together as one body to write new songs, putting aside any ego and insecurities we carried, to step into the Word and to prayerfully and genuinely lean into what we felt like the Lord was telling us to write. We started our conversation with making two lists for each club night – 1) where kids might emotionally be for each club and 2) what the speaker would be sharing about the Gospel in each club. We deeply wanted to bridge the gap from club to club and also present new songs that would help communicate the Gospel as they were being sung, as well as emotionally connect with where kids are at, all in an effort to better set up the camp speaker for the Gospel presentation.

What unfolded was an amazing experience. Often, when gathering to co-write, you meet with one, or maybe two other songwriters, to craft a song and we expected that that would be what we’d do, but because of the nature of this group and the amount of fun we had writing, we stayed together for almost the entire time and all had equal say, as these songs were being written. Nine collaborators coming together with one purpose. It was a beautiful picture of the Gospel and by far, we were all in agreement that this was one of the most fulfilling musical experiences we have ever had. We also agreed, that this would not be the last time this would take place!

The six songs that were written cover the themes of clubs 1-6 and several of them can be repeated throughout the week. We very specifically wrote the songs with both kids and leaders in mind, so the melodies are easily learned and any guitar playing kid/leader could easily learn/lead these songs, with no more than 4/5 chords in each song. We have written up simple chord charts and recorded the six songs live in a super organic (YL club-like) way and will be providing links to these on the Young Life website. Our hope is that these songs will catch fire and permeate every club room at camp this summer and that kids will go home singing these songs and want to sing them at their local clubs, and that they will know that they are beloved sons and daughters of the King and that God wants to be in relationship with them.”

Click on this link to listen to the songs on SoundCloud