First Club Talk Of The Semester: Jesus Is God 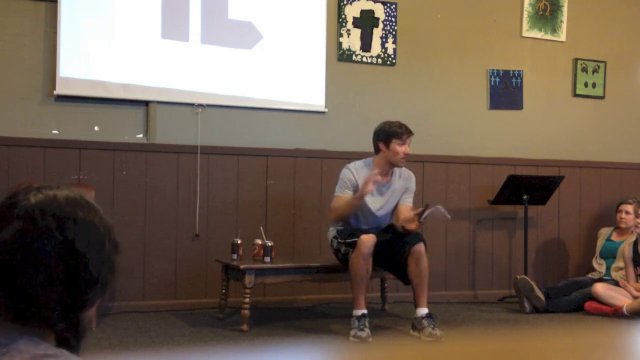 Typically for the first club talk of the year we give a basic introduction to who God is.

We always say something like: ‘We can tell what God is like by looking at Jesus, and that’s what we’re going to do this year at YL.’ Then we invite our high school friends to ‘come and see’ (John 1:46) what Jesus is like.

Over the sixteen years I’ve been leading YL I’ve noticed a shift in teenagers. With the invention of Google it seems that any answer can be found in seconds. Proof and facts are a click away.

Apologetics isn’t an easy task, but it’s something we need to do a better job of if we want to reach this generation of teenagers. They want proof, let’s give it to them. Let’s do more than just tell them that Jesus is God and invite them to come and see, let’s show them why we believe that’s true.

Below are a few helpful points, most of which I’ve borrowed from a Tim Keller sermon he gave on Christmas a few years ago. I wouldn’t use all these points in your talk, it will get too heady and crowded and not feel like a YL talk. Read through the list below and pick a couple for your talk. Use the others as you follow up with kids one-on-one or in Campaigners.

How do we know that Jesus is God?

1. His Very Name Is Immanuel

The first place Jesus is introduced in Scripture, we’re immediately told that Jesus is God. Matthew 1:23- Behold, the virgin shall conceive and bear a son and they shall call his name ‘Immanuel,’ which means, ‘God with us.’ The creator of the universe has become a human being.

Paul writes in Colossians 1:15, ‘Jesus is the visible expression of the invisible God.’

Luke records Peter preaching in Acts 20:28 and he said that ‘God purchased the church with his own blood.‘  He was referring to Jesus and the cross.

In the Gospels, Jesus forgives people of their sin. You can only forgive someone a sin if they’ve sinned against you.

Tim Keller explains this way: If John punches Steve and Tim walks over and tells John that he forgives him, they will both say ‘Tim, you can’t forgive John, he didn’t hurt you, he hurt Steve.’ Steve is the only one who can forgive him because John sinned against Steve.’

When Jesus tells the paralytic that He forgives his sin, the only explanation is that the paralytic had sinned against Jesus, Jesus being God.

Whenever an angel shows up in the Bible, everyone tends to drop down to their knees out of adoration. (Daniel, John, etc..) But the angels always tell them to ‘get up, because I’m a created creature like you, don’t worship me.’ But when anyone bows down in worship to Jesus in the Gospels, He receives it. He allows people to worship Him as God.

5. His Followers Believed He Was God

The very last people in the entire world that would believe a human could be God would be 1st century Jews.

-Eastern religions (Hinduism, Buddhism, etc..) and pantheists have always believed that some people are avatars (human manifestations of a god-force) and that God is in everything.

-Greeks and Romans were polytheists, they believed in a lot of gods, remember your Greek Mythology classes? They thought gods could dress up as people and come to earth.

-But Jews had a very different view. They believed in the God of the Old Testament, an uncreated Creator, bigger than the universe, they never thought that God could be a human. Sure, they hoped a Messiah would one day come, but they would never worship him as God. God couldn’t possibly become a man.

And if I wanted to convince someone that I was God, I wouldn’t start with my family. The people who know me best, know me at my worst. My wife knows I’m not worth worshipping.

When I was a kid I was a huge Atlanta Braves fan. I loved a this one player (who will rename unnamed so not to slander him.) I practically worshipped him. I had his jersey, his posters, watched every game, wanted to be just like him. My dad made me the happiest kid alive and took me to Atlanta for a game. We waited for 2 hours afterwards so I could get his autograph after he came out of the locker room. I’ll never forget him cussing at me, demanding I get out of his way. From afar, he looked perfect, but as I got closer, I no longer was a fan.

But the people who knew Jesus best chose to worship him. They must have seen that he was actually who he claimed to be. They must have seen a tenderness and power combined, truth and love manifested in one person. Would you ever worship someone as God if you didn’t think they were perfect?  The disciples began to realize that they were looking at the very being of God in the form of a man.  Maybe they thought, ‘As insane as it must be, all alternatives are even crazier. This must be ‘God With Us.’

And their conviction was so strong they died for what they believed.

Who Is This Man? by Mitch Dane

What If What They Say Is True

I Have A Maker

I’ll Find You There