We’ve recently felt a need to switch up club from the typical indoor routine of songs, skits, and games.  Tonight we’re throwing a big cookout party. We’re just hanging out and enjoying each other in the spring weather. Club will be very low structure but we’re still doing a talk at the end. During the hangout time we’re going to have most of these games set up. The first one, Spikeball, is my favorite. Check back on the blog this week to have an opportunity to win one of the three Spikeball sets ($50 retail value) we’ll be giving away! 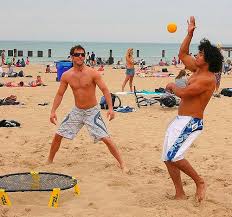 An intense mix between 4-square and volleyball. On the Spikeball website it’s described as “a taut hula hoop sized net is placed at an ankle level between a pair of two-player teams. You smack the palm-sized ball down on the net so it richochets up at your opponents. They have up to three hits between them to control it and bounce it back to you. When they miss, you score. Play to 21.”

Fricket (FrisbeeCricket/Flimsee/Cups)
This is a cheap, fun, and unique game that any skill level can play. It basically involves throwing a frisbee between two 5 ft poles with plastic cups on top of each pole. You score points in a variety of ways by either avoiding the cups or by knocking them off. Rules here. I went to Home Depot and bought skinny pvc pipe and made my own poles, but they don’t stick in the ground very easily. Here is a set you can buy for $20 on Amazon. Ski poles actually work, but you want a flimsy pole (thus its sometimes referred to by the name “Flimsee”.) Here’s a random video of some folks playing. 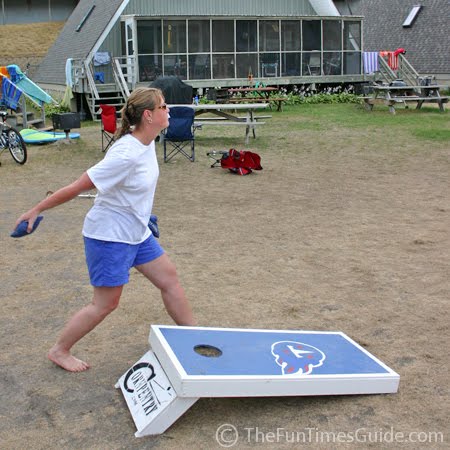 Cornhole/Bag Toss
If you’ve been to a tailgate party, frat house, or the beach over the past few years, you’ve surely already had the sheer joy of tossing a corn-filled bean bag through a hole in a wooden board 45ft away. If not, trust me, you’re life is incomplete. If you don’t own a set of cornhole boards, you should. But if not, odds are that a friend of YL in the area does, so tweet it out and borrow a set. Heavier boards are way more fun than the $30 plastic set at Walmart, but it would be fun to build your own custom YL set. Could be a great Campaigners project! I’d recommend purchasing well constructed bean bags instead of making your own. 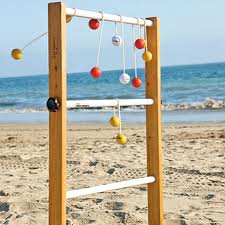 Ladder Golf
You swing a rope with a ball on each end and try to get it hung on a “ladder.” Its easy to play for any skill level, cheap, and easily portable.

Washers
I like this game for its old school simplicity. You just need 2 old large cans (coffee or Costco green beans) and a few washers from the hardware store. Not as fun as cornhole, but the same principle and its cheaper.