Hey guys! My name is Alex Ridenour and I am on staff in Costa Rica with the International Schools.  My team and I recently worked extremely hard to recreate a Young Life event the Real Life Hunger Games. I know there have been many other parodies of the Hunger Games but we wanted to truly recreate it.  So we began by watching the movie again, having a late night planning session with pizza for hours, and then spending 2 whole days prepping the materials for this club.   All that to say, I did not want our hard work to go unused, so that is why I am sharing it with you now!  We hosted our event last week; it was a blast and huge success!! I think Young Life events are a great way to draw in more kids that might not be as open to coming to normal club as well. I hope you can benefit from our hard work and enjoy a fun YL version of the Hunger Games!!

Detailed Rundown of the Event
Upon arrival Kids are welcomed by Capitol people and placed in their districts.
Katniss and Effie officially welcome them to the Capitol and they begin training practice.

Training:
Target practice: mark out a target on the ground with chalk or tape…kids aim for the center with water balloons or fruit to smash [like Peeta’s strength]

Balloon Shooting: make faces on blown-up balloons, tie strings to them, and attach them to some sort of weight to hold them down…kids will have nerf guns, bow and arrows, darts/plastic knives to aim at the “people” [like Katniss shooting at the body outlines with her bow]

Q: Where did Peeta learn how to camouflage himself?
A: He decorated cakes in his dad’s bakery.

Q: What is the name of Katniss’ sister?
A: Primrose.

Q: What district are Katniss and Peeta from?
A: District 12.

Q: What was the pin that Katniss wore during the games?
A: Mockingjay.

Q: What is Katniss’ weapon of choice?
A: Bow and arrow.

Q: How did Katniss and Rue communicate during the games?
A: Whistling to Mockingjay birds.

Q: What color is the backpack that Katniss grabs from the cornucopia?
A:  Orange.

Q: When living in district 12, before the hunger games, who does Katniss often sell    strawberries to?
A: The mayor.

Q: Each district is known for something. What does district 4 represent?
A: Fishing industry.

Q: What does Katniss shoot in order to blow up the other tributes’ pile of food?
A: A bag of apples

Q: How many fingers does Katniss hold up when showing respect with her district and for Rue?
A: 3 fingers

Alliances/Fire-Berries-Tracker Jacker Train Game (like Rock-Paper-Scissors Train Game): Introduce as “Alliances are good and a necessity for survival, but the only way to do it is this game…” Fire beats berries, berries beat tracker jackers, tracker jackers beat fire. Stop the game when there are 4 teams (Alliances).


Objectives given before launched:

Tell kids to work with their alliances that they made previously to entering the arena during training.

Build your makeshift hut: kids can use things around them to make hiding places.

Camouflage Yourself: kids have some paint, leaves, twigs, and tape to make themselves blend into the background/nature [like Peeta did with painting himself]

Warn them there will be Game Makers.

I also recommend making boundary rules that fit your setting!


Arena:
Cornucopia/Steal the Bacon: kids round up [just like the entry of the game] with all the “packs” of tents/weapons/paints/rope up front…all go for them at once!

Balloon Lives: Each kid gets 2 balloons, one for each ankle. Their balloons equal their life. If both balloons are popped, they are eliminated. Like the common game.

Cannon sounds: When a kid gets eliminated, play a cannon sound and put their picture on the screen with their name (and their district #?)

Game Makers: Throughout the games, leaders will throw water balloons, ‘dogs’ –humans chasing the kids- come out, dried beans as tracker jackers, take ketchup and mark kids’ arms/legs/etc. Each limb that is marked cannot be used because its been injured.

These are just the ones we did you can make them fit your leaders and we also had to leaders just be Capitol people who were sponsors.  The sponsors were nice to have as a threat to calm and control the kids.

-Effie will assign districts as people come in. Use stickers with district numbers.
– Introduction: Effie says, “Welcome to the 76th annual hunger games, may the odds be ever in your favor,” etc.
-Training games: Katniss and Cinna (“here to help prepare you for the games..” etc.)
-target practice
-balloon game
-tug of war?
-Trivia game: Caesar
–Alliance building: Katniss
–Explanation of what’s going on in the arena: Caesar
-Launched into the arena- Effie and Katniss
–GameMakers- everyone
–Songs
–Announcements: Caesar
-song 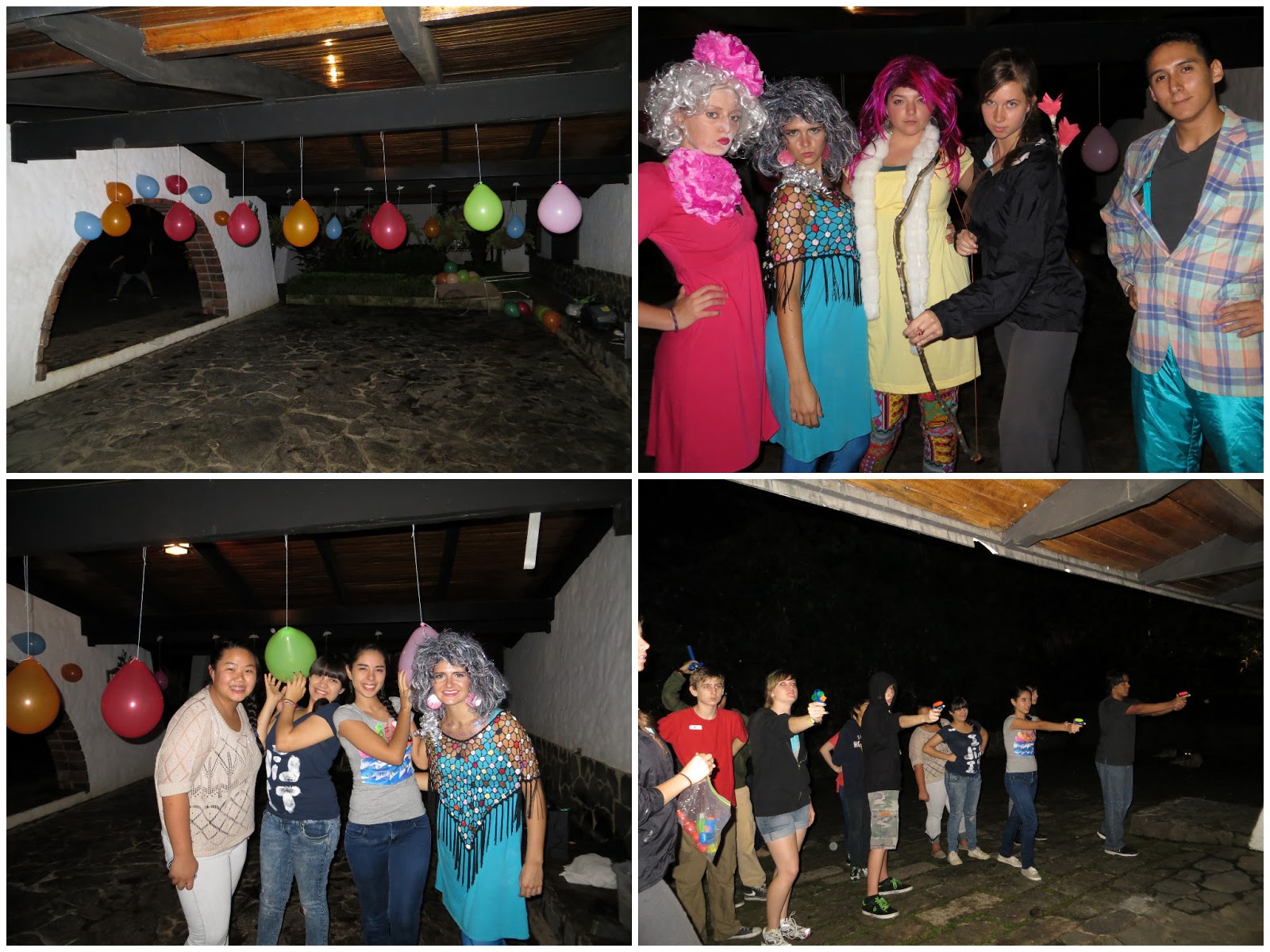 Thanks, Alex, for this theme club idea! Let us know how you have incorporated pop culture to create theme clubs in your area. Here’s how you submit a guest post.