Why So Many Freshmen Came 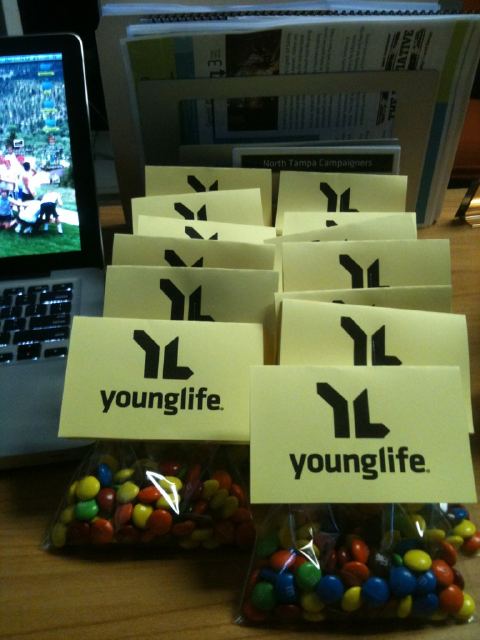 Our area has a tradition of starting each new school year off with an All-City Freshmen Club. I honestly wasn’t expecting many freshmen from our school to show, but to my pleasant surprise, a ton of them poured through the doors. Why did they come?

Not because they saw me at school and thought, “That guy sure looks supah-swag, I wanna go to his thing.”(By the way, I got made fun of in the lunchroom today for wearing Chacos by a kid wearing Vans. Seriously. Kids these days.)Not because they heard we were giving away free iPads, which we weren’t, but that would’ve been cool.

Not because we have custom made Young Life corn hole boards, which we do, and that is cool.

You remember when you were a freshmen. Seniors hung the moon. If a senior offered you a ride somewhere, you were kickin’ in the front seat, or sittin’ in the back seat, tryin’ to make your mind up which seat you should take.

Seniors have unreal influence with freshmen. Our area does this “Senior Leader” program where one of our staff folks trains mature high school seniors to essentially be YL leaders in their schools. Senior Leaders are asked to make sacrifices. They sign contracts committing to moral purity. They spend lots of gas $ picking up freshmen. They do contact work, skits at club, lead campaigners, lead a cabin at camp, and most other things that an adult YL leader does.

Today in the lunchroom a senior asked me “Why should I commit to being a ‘senior leader’ in Young Life instead of just doing the senior thing and living how I want this year?”

I told her a quote I once heard from a pretty wise man. “Whoever wants to save their life will lose it, but whoever loses their life for me and for the gospel will save it.” (Mark 8:35) I also told her that she basically had two choices.

“You can spend your senior year doing what feels fun in the moment, but you’ll probably be constantly looking over your shoulder in fear of getting caught….and you could make some fun memories… that will probably eventually turn into major regrets.”

“You could loseYOURlife…and change the lives of a bunch of insecure and confused freshmen girls…and you probably won’t be as popular with the seniors. But, instead of guilt, fear, and regret, you’re gonna get something else. You’re going to get a phone call from a freshmen girl one night, crying, asking you for help and advice. And you’re going to get the chance to show her Jesus. To point her to the One who is our only hope.”

“It’syoursenior year.You’vegot to make the choice of how you want to spend it, and who you’re gonna live for.”

Seeing those newbies show up to Freshmen Club motivated me to continue to cast a vision for our seniors and upperclassmen, so we’re getting them together this Sunday night. We’re going to shoe-polish everyones’ windshields with “YL 2-Nite,” pray for our first club, and just dream together about what God could do through them at their high school this year. We’re also stealing an idea from Greg Stevens, a YL leader in Florida. Instead of “flyers” announcing club, we’re going to do “Invitations” as pictured above. During our time on Sunday night we’re going to fold, stuff, and staple them together so upperclassmen can invite folks during school on Monday.