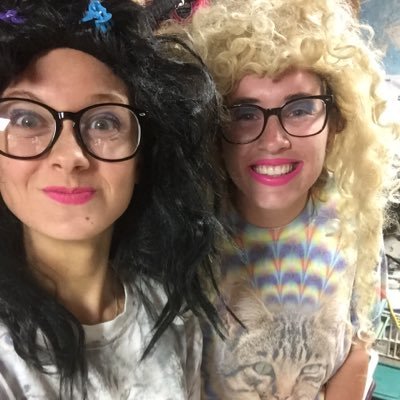 You can win a Spikeball set by emailing us your best Run-on/Walk-on skit ideas by this Friday, Dec. 11th. Include a pic and/or video, repeater lines, theme music, and any instructions on how to steal your idea. We’ll collect the best ideas and share them in early January.

Below is an example of what we’re looking for. It was shared with us by Natalie Betts, a volunteer leader in Burlington, NC.

Our characters are Vicky and Valorie, annoying middle schoolers aspiring to be YouTube sensations. We started each week sitting in front of our video camera as if we were filming a “vlog.” (vlog = video blog)

In week one we emphasized that we wanted to be famous YouTube vloggers—that we were going to create the ultimate YouTube video that would instantly go #viral.

(Many of our lines ended with some sort of hashtag, similar to the Jimmy Fallon and Justin Timberlake video, “Hashtag”)

We showed a video that we “created” and was sure to go viral. The catch was that we stole the video from another YouTube account and it had already gone viral. Think the classics – Charlie Bit My Finger, Girl Burns her Hair Off, Evolution of Dance, etc.

Our straight man called us out and we promised to come back the following week with an original video that was sure to go viral.

The following weeks, we did the same, stealing another famous video, claiming it was ours, and being called out on our bluff. We were #ashamed.

Throughout these clubs, I was filming footage of kids at club dancing, having fun, doin’ their thing. This was all with the plan of putting a real video together to show the final week of the run on – something funny but that would mostly show kids, making them feel special.

Around this time, the song “Sorry” by Justin Beiber was released – and we knew we had to use it to “apologize to our fans” (kids at club) for stealing all the videos.

So we made a music video, changing the lyrics to the song and adding our own twist. It was really fun and pretty simple to make! Kids thought it was hilarious, and will hopefully show it to their friends! Hope you like it!