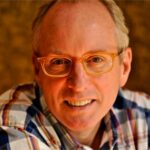 His name was Eric. He was 28, a part-time carpenter, and a full-time volunteer with Young Life.

Eric was gentle, funny in an understated way, and confident without swaggering. He occasionally let himself be the subject of a sentence, but rarely for long. He was far more interested in knowing what was happening in your life. His syntax was selfless, his grammar self-forgetting.

My father was an alcoholic, unpredictable and demeaning. Eric was the first adult I trusted enough to talk to about the chaos and fear that made up the soundtrack of my adolescence. After Young Life Club he would drive me home and wait in my driveway until I waved from my bedroom window, our signal that my father was asleep and I was safe. He’d flash his high beams in reply. If I called at any hour he’d rush back to get me.

One night before I got out of his car Eric asked me if I wanted to pray with him to receive Christ. I would have followed Eric off a cliff, so I followed him off that one. How could I have known what the implications of that stammering prayer would be?

I’m not old but I’m of an age when memories visit me unbidden. I thought of Eric last night as I drove home from a Barnes & Noble bookstore where I had just given a reading from my new memoir. Eric’s name is just one of many found in the Acknowledgments on the last page. I thought about placing it in the front but I suspect this would have embarrassed him.

I then thought about all the youth workers who still sit with kids in idling cars and dare to ask the ancient-yet-evergreen question, “What do you think about Jesus?”

This morning I tip my hat to overworked and underpaid youth workers everywhere. The gospel writers tell us Jesus healed ten lepers but only one returned to express his gratitude. If you’re a youth worker count me among the few God inspired to come back to say thank you. I apologize it took thirty-five years.|

Ian is an incredible writer. You can read more on his blog or follow Ian on Twitter.

Let’s make the comment section below an“Acknowledgments Page” of sorts. Who was that adult in your life? Who introduced you to Jesus? Why not say “thank you” below and include their name?

Ian has donated ten autographed copies of his newest book,“Jesus, My Father, The CIA, and Me”that will be mailed to ten lucky winners, randomly selected from all those who leave comments below. I will post a list of the winners on Friday at which time you can email me your address so we can send you Ian’s book.

Ian Morgan Cron is a champion of the Enneagram, awakener of people, and bestselling author of the popular Enneagram book, The Road Back to You. Ian met Christ through Young Life and later went on the Young Life staff. He also spoke at YL2020.