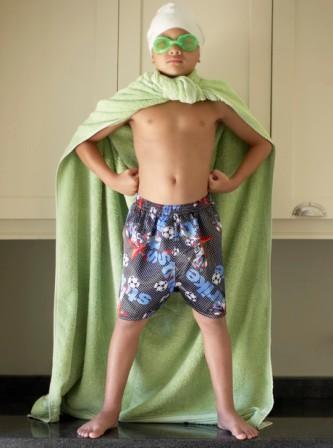 As as a follow up to yesterday’s post,here are the details for the Bus Program we attempted on our way to camp last week.Remember, its intentionally lower quality than we’re used to in club for the sake of humor.3 Characters:If you have different schools on your bus, get a leader from different schools to play each character.Super CamperThe main character, dressed as a super hero using a makeshift cape and some sort of mask. You could cut eye holes out of a strip of cloth or bandana or even use goggles. A duct tape SC (for “Super Camper”) on the cape or middle of chest would be a nice touch.Lil CampieSuper Camper’s side kick, dressed similarly.Camper DamperThe Villian. We used a black graduation gown and a Mexican wrestling mask. Having a mask is key during the resolution of the program.Intro MusicRemember to bring the correct chordso you can plug your iPod into the DVD player on the bus. It needs to have a head phone jack on one end and the Red/White RCA inputs on the other side. For Super Camper and Lil Campie, we just went old school and junkyard and used theMighty Mouse Theme Song. For Camper Damper, we used the instrumental version of Metallica’s “Enter Sandman.” Sadly our bus driver didn’t know how to work the DVD player sound, and we couldn’t figure it out either, so we held an iPod up to the bus microphone. This also was a bust because it gave too much feedback, so we just pretended that we were intentionally lowering the quality for the sake of humor.Pre-Scene 1Super Camper, Lil Campie, and Camper Damper have changed into costume either behind a curtain in the back of the bus or a leader holding up a sheet, or inconspicuously in the front of the bus. It’s best if you can still maintain the important element of surprise.Scene 1Super Camper enters to superhero music and says something like, “Greeting Goys and Birls, I am SUPER CAMPER and I’m here to help you have THE BEST WEEK OF YOUR LIVES!”
The same intro music plays again and Lil Campie enters and says “And I’m Lil Campie, and I’m also here to help you have (said together with SC) THE BEST WEEK OF YOUR LIVES!” It’s funny at this point to hold onto the overhead compartments and do flips and go crazy on the bus, giving high fives to campers.

SC: “Lil Campie, what do you think is one of the most important parts of becoming a super camper?”
LC: “Well, Super Camper, I’m glad you ask, because my goal in life is to one day reach super camper status, so I have been studying a lot to discover what makes a great camper. One of the most important findings in my research is that a super camper needs to be able to remember lots of names.”
SC: “That’s exactly right Lil Campie. So to help out all our little friends we’re going to play a lil game called Blanket Drop. (Click here for instructions.)

After the kids have spent 3 minutes mingling and learning names, divide into 2 teams, the back of the bus versus the front of the bus. Play to ten. At the point when one team has 8 points, get another leader to hit the Enter Sandman instrumental so Camper Damper can enter and disrupt the game.

Camper Damper: (In a mean voice) “Sit down goys and birls. I said sit down. There will be no games played on this bus. Games are for pre-schoolers.” (Looking at the high schooler with the most facial hair on the bus) “Are you in pre-school little one?”

SC: “You will never ruin our week, not if Super Camper has anything to say about it!”

CD: “What are you going to do about it, silly man with the cape on?”

SC: “You don’t want to wait around and find out” (Super Camper picking up his pillow ready for a pillow fight.)

CD: “Hold your horses, I mean your pillow, silly dressed funny man. I’ll leave for now, but if you start playing any more games on this bus, Camper Damper will return to ruin your party, and that’s not a threat, that’s a promise.”

Camper Damper leaves to his music.

SC: Campers, I apologize for that rude interruption, but Lil Campie and I won’t let Camper Damper ruin this week, we give you our solemn vow. We’re committed to helping you have

SC/LC: THE BEST WEEK OF YOUR LIVES!

SC and LC exit to their music.An abbreviated version of the final three scenes/mixer games will be posted tomorrow.