A Darth Vader Scavenger Hunt: May the 4th Be With You 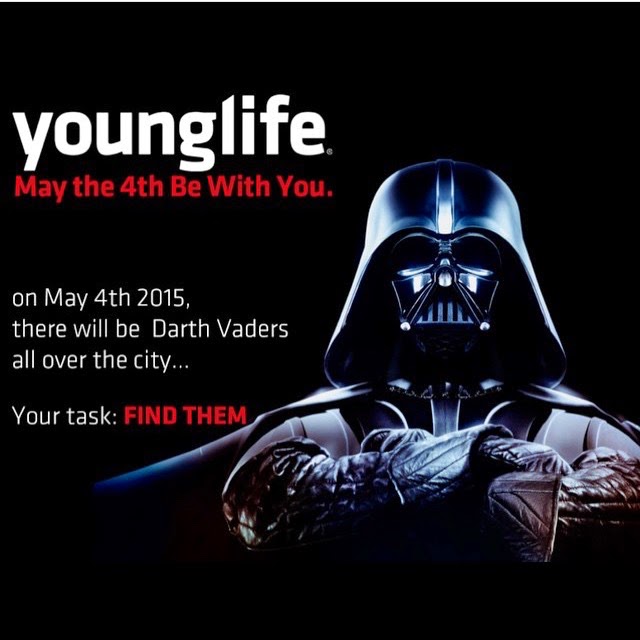 Last year around the end of the year we decided to do a
“Ninja Scavenger Hunt” where a bunch of awesome adults dressed up as ninjas
around town and the kids went off to find them! This year, during our planning
meeting our scavenger hunt landed on Monday, May 4th. Immediately
one of our leaders said, “May the 4th be with you!” and we all
started freaking out about how cool it would be to have everyone dress up as
Darth Vaders instead of ninjas.

HOW TO DO A DARTH (or ninja) HUNT

The first step in this process is to call your local police
department. For us, this was to initially let them know what we were doing.
Having a bunch of random people standing around town in business and on street
corners dressed as ninjas (or Darths) might seem a bit suspicious. However,
that call ended up being way better than I could have hoped. After being
transferred several times I spoke directly to the chief of police who was
probably more excited about the event than I was. He offered to open up any
public facility that I wanted to place a ninja at. So, we have Darths this year
at City Hall, the Police Station, Fire Department, and Public Transportation
stations. In addition, they raised the amount of patrol during the time of our
event to make sure all the locations and kids were safe. So so cool!

We also will have Darths at several local businesses. I
contacted, Dairy Queen, Jack in the Box, and Taco Bell. They were all down to
help us. They also donated some things for kids to use as challenges. – We’ll
get to that in a moment.

I mean, who wouldn’t want to dress up as a ninja or Darth
Vader and have some fun with high school kids for a couple of hours on a Monday
night?! Haha. I got some volunteers from my church, our committee, and kids
parents. This year we have a total of 12 Darth’s all over the city. I gave them
detailed instructions on how the night will go (email me if you’d like a copy
of these documents.) I also provided them with a simple Darth mask from Party
City and asked them to dress in all black. Last year I had everyone make a
t-shirt into a ninja mask. You can find out how here.

You will want all your locations to be within 2-3
miles from the club room or from one-another if your club location isn’t close
to a lot of places. Map out how the kids will flow from one location to the
next. I made a huge circle from one location to another on a map and the kids
went in that order from location to location.

How the night
works

The goal here is not so much for the kids to find the Darth’s. It’s
for them to get to as many as possible before their time is expired. Kids meet
at the Club Room at 7:02. I have them divide into teams of 4-5 with a leader or
approved driver in each team. We give the kids intense instructions on not
speeding if they are driving or they will be disqualified. I give them a score
sheet and the location of their first Darth in a sealed envelope. They are to
open the envelope all at once on the count of three and then they can leave.

Once they arrive at their first Darth, they are given a challenge –
also in a sealed envelope. Here’s a list of some of the challenges:

• Run around the entire school (our HS is right by our club room.)

• Recite the ABC’s forwards and backwards

Once they complete their challenge they give the score sheet
to the Darth who signs off on it and gives them a random amount of points between 100 and 500. I’ve told the Darth’s
these points are not based off merit, but just random.

After signing off on their challenge, the Darth gives the
kids their next location in a sealed envelope.

They have until 8:45 to get to as many Darth’s as possible.

At that time they must all meet at Taco Bell for a giant
group picture and to tally the points. For every minute they are late they
loose 100 points.