How To Give Unforgettable Club Announcements

Here are a few ideas to help them remember. 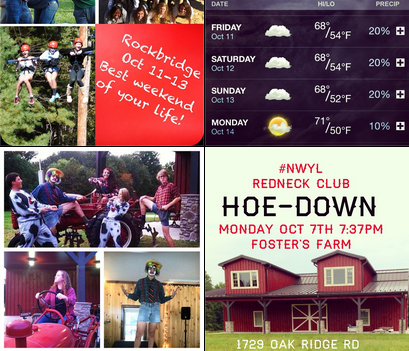 In addition to telling kids all the announcements at club, we tweet them out an hour or so later around 10:15pm. They are usually longer than 140 characters, so we link to our club blog. Here’s an example of how we ‘blogged’ our announcements this week. We can look at the stats and see how many unique visitors read the post and it’s typically over half of the kids who were at club.

We also send a monthly email out to the parents for whom we have email addresses. Most kids write their parents’ email addresses down on their club cards. For those we can decipher, we enter them in and send an email letting parents know about the announcements. Typically we include a link to the club blog and copy and paste the announcements in the email. We also include a ‘Ways You Can Help” section to encourage parents to get involved.

Sometimes we’ll print announcements and hand kids a quarter-sheet of paper on the way out of club. It also works well to ask a few leaders, senior leaders, or volunteer parents to pass these out through car windows as parents are picking kids up.

WHEN TO GIVE CLUB ANNOUNCEMENTS

An effective time for announcements is at the very end of club, after the talk. This is difficult at first as kids are ready to leave, but if you develop this rhythm they will soon learn to remain seated and focused up front. We don’t do all the announcements here, but typically the few that we want to hammer home. If we’re showing a camp video or doing an extended announcement then we place it more in the middle of club.

Slow TransitionAnother option that has worked well is putting the annoucements before the final set of slower content songs. Announcements typically help transition from a crazy game to a slower pace in club.

Less Is MoreThere are often many things that need to be communicated, but kids will not remember many things. Choose which is most important to communicate from up front. Communicate the rest through twitter, texting, flyers, etc…

Their StuffDon’t just announce your stuff, announce their stuff. Kids feel special if you give shoutouts for birthdays that week. This weekend our football team had a huge come from behind victory and made the front page of the newspaper. I took a picture of it and put it in the slide show for tonight’s announcements. Announce when the school play is, the JV volleyball game, and any school events coming up.

How To ConnectMake sure kids know how to connect with you and how to get the info they need about YL. Each week we put up a slide reminding them to follow NorthwestYL on Twitter and Instagram. We also put up our Team Leader’s phone number for them to join the text message list.

When giving announcements, make sure to think of how they sound to a first time visitor to club. As a newbie, they probably don’t have any idea what ‘campaigners’ is, so make sure to explain it, as well as invite kids personally. Don’t let up front announcements substitute for personal invitations. Use “outsider” friendly language as to help newcomers feel like they belong.

One of our juniors made a 90 second video we show every 3 weeks that has lots of the same info we repeat each week (campaigners, twitter, instagram, blog, etc…). It is fast-paced and views like a commercial. Its great to play as a transition between a game and a set of songs.

Man On The Street Videos

Take your iPhone and video four different kids individually at the football game on Friday night, each giving one announcement. Show those four quick clips at club on Monday. Terminology

Don’t call them ‘announcements.’ That sounds boring.  Make up your own terminology like “The E.L” (The Even Lowah than the DL, the down low.) Think of a fun name for this segment of club.

Run-on characterAnnouncements are more memorable when they are funny. Have a character(s) that comes out each week and does them. A news-anchor, a David Letterman Top 10 list, two high school girls doing each announcement as a cheer in uniforms, etc… Be creative!

When I was in high school the YL leader would sing that same intro, “Announcements, Announcements, Annooooounce…ments!” And then everyone in the club room would yell in unison, “We sold our cow, we sold our cow, we have no time for your bull now.”  My first time going I was caught off guard and thought it was weird, but a few weeks later I was screaming about my cow with everyone else.

It’s fun to think how even announcements can help kids know they belong.